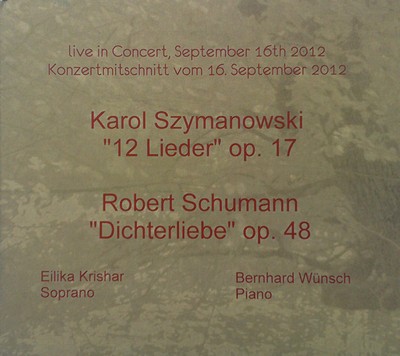 The world's first complete recording of the cycle "12 Songs", Opus 17 by Karol Szymanowski is here combined with on eof the audiences' favorite Song Cycles (Kunstlied) the wellknown "Dichterliebe" Op 48 by Robert Schumann.
Here present a live recording from September 2012.

Although frequently associated with the male voice, the work "Dichterliebe" by Robert Schumann was dedicated to the great soprano Wilhelmine Schröder-Devrient,[1] so that the precedent for performance by a female voice is primary.

Dichterliebe, 'The Poet's Love' (composed 1840), is the best-known song cycle of Robert Schumann (Op. 48). The texts for the 16 songs come from the Lyrisches Intermezzo of Heinrich Heine, composed 1822–1823, published as part of the poet's Das Buch der Lieder. Following the song-cycles of Franz Schubert, those of Schumann constitute part of the central core of the genre in musical literature.

CONCERT (ct). With a very special evening of songs began last Sunday evening Schwörhauskonzerte the season 2012 / 13. A mixture of familiar and rare, the soprano Eilika Krishar and pianist Bernhard Wünsch presented to the audience.
They introduced two song cycles: The, "12 Songs" op 17 by Karol Szymanowski and, "Dichterliebe" by Robert Schumann. Karol Szymanowski, "12 Songs" op 17 have, when you generalize, a late-Romantic attitude. They have with their far-flung ideas something deeply dark poetic. His music is rooted in the late Romantic period, but he tried to compose (his own admission), not for yesterday, but for today and tomorrow.
The interpretations of the songs get the two performers were top.
Eilika Krishar impressed with striking shades of her soprano voice and showed her impeccable vocal technique.
She resuscitated the tones formally like to set accents with almost unearthly pianissimo, followed by strong fortissimo. Remarkable, especially since Karol Szymanowski "12 Songs" often moved to the limits of tonality.
Eilika Krishars strength lay in the differentiation of the dynamics with which she created the drama of the songs' contents, but also in the understanding of the text, which was naturaly and completely unforced pronounced. (...)
The duo crafted the songs as long, rich development and clearly periodized scene. The overall context was thus complex and varied, and all "12 songs" reached amazingly high level, especially by the great piano part, masterfully played by Bernhard Wünsch.

Like a wake of a wispering half joyful longing in spring

This interpretation of Eilika Krishar and Bernhard Wünsch is full of warmth, powerful in emphasis, concise and secretly formed by the dynamic contrasts in in music and poetry.
One can, by listening to this interpretation of the 'Dichterliebe', flow into a diffuse, semi-blow, half joyful longing for a spring's love. (...)
Eilika Krishar knows how create a firm but tender balance between gentle melancholy and joy, as well as poetry and bitter resentment of the 'Dichterliebe'. There is also a great discipline in the vocal line and the open, never strained tone. And all this art was paired with Eilika Krishars sensitivity to gesture with the right technical skills. Her soprano sounds balanced in all positions. Dynamic flexibility served as a natural means of interpretation of the text, sometimes redeemed to a whisper, always well-supported Piani could appear sumptuously sweet, sometimes covered the height of Forte without sharpness.

And Bernhard Wünsch showed at the piano through a deep sense of touch the variety of color ​​of these special iridescent and charcteristic music of Schumann.
Much applause for this superb duo by the audience (...).